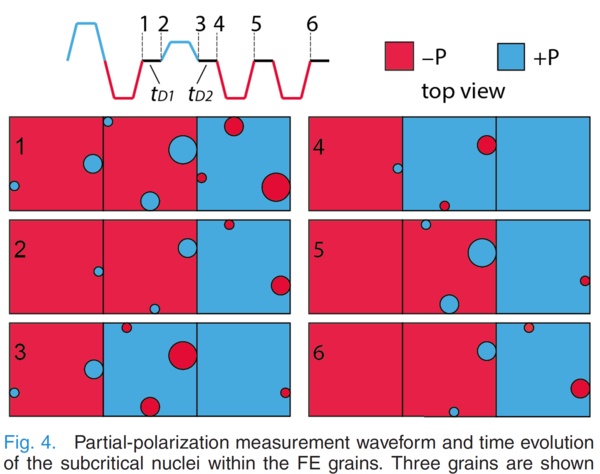 Polycrystalline ferroelectrics like hafnium zirconate (HZO) and lead-zirconium-titanate (PZT) switch at a speed determined by the nucleation and growth of ferroelectric domains that exceed a critical volume. Reading and writing of a ferroelectric memory is achieved by a sequence of voltage pulses. It was found that subcritical domains that do not reach the critical volume can persist for times as long as 1 s and as a result effect the response of the memory to subsequent writing. This is especially important when using the memory to store analog weights. This finding was reported by Pratyush Pandey in the October 2020 issue of IEEE Transactions on Electron Devices, “Programming-pulse dependence of ferroelectric partial polarization: insights from a comparative study of PZT and HZO capacitors.” The subcritical domains in HZO were found to persist for times as long as 1 s. Ted Moise and Uday Udayakumar of Texas Instruments provided PZT capacitors to compare alongside Notre Dame HZO capacitors. The persistence of subcritical domains was found to be much weaker in PZT.